To Tread in the Place of Uncertainty 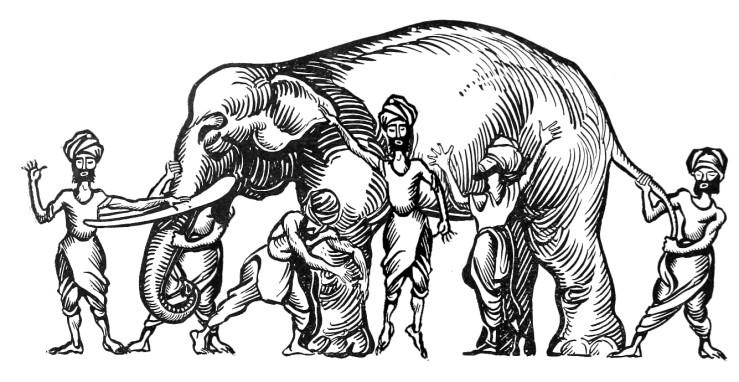 There is an ancient Indian parable that tells a story about perception:

A group of blind men heard that a strange animal, called an elephant, had been brought to the town, but none of them were aware of its shape and form. Out of curiosity, they said: "We must inspect and know it by touch, of which we are capable". So, they sought it out, and when they found it they groped about it. The first person, whose hand landed on the trunk, said, "This being is like a thick snake". For another one whose hand reached its ear, it seemed like a kind of fan. As for another person, whose hand was upon its leg, said, the elephant is a pillar like a tree-trunk. The blind man who placed his hand upon its side said the elephant, "is a wall". Another who felt its tail, described it as a rope. The last felt its tusk, stating the elephant is that which is hard, smooth and like a spear.

Now, depending on the version, the blind men either get in a fist-fight about who is right, or they cooperate and discover the whole is greater than the sum of its parts.

Behold, the duality of man!

The takeaway here is obviously that our limited perceptions of the world are often holding us back from seeing reality as it is, and that to figure things out, we need to be able to see beyond the framework we’re confined to.

Here’s the problem, though.

While the subjective perceptions of all the blind men are certainly the best they can do, they’re all wrong when it comes to the whole.

Is their subjective experience “valid?” Sure.

Does that make it correct? Nope.

Let’s make an analogy: the blind men here represent the tendency of different parts of the mind (reason, emotions, etc.) to assume their own primacy. If you assume your reason is infallible and that logic alone will navigate you through the world, you’re going to have a bad time trying to explain to your wife how she’s wrong for being mad when you told her that the dress makes her look fat.

Similarly, we tend to take these one-pointed analyses of the world and project them into entire worldviews as ideologies. Marx, for example, being a worthless bum who never had a real job, only had the capacity to see the world through bum-eyes and thus wrote the greatest of all bum-philosophies. Generally, one would consider that the painting of an elephant by one of the blind men wouldn’t be much more than a novelty, but ironically the notion that the plights of the working class can be adequately addressed by someone who was literally not a worker seems to pass by just fine.

At any rate, in the modern world, we’re in a weird spot. The complexity that we’re moving into has steadily broken each and every lens by which we once viewed the world. Greek philosophers didn’t address the problems of social media, and it’s likely that the Buddha doesn’t have any thoughts on whether genetically-modified crops are okay.

We can term these emergent problems- they show up as a result of complexity, and they’re not able to be anticipated before they arise. If anyone knew Facebook was going to destroy the American political system as well as the quality of written media on the internet, they certainly didn’t do anything about it.

Thus, we enter the Place of Uncertainty.

As our old worldviews and ideologies fail us, we’re left like Macaulay Culkin on Christmas to face the Wet Bandits of a cruel and uncaring world. What’s more is that in this case, it’s not enough to rely on just our perception of the situation, because while Harry and Marv may be breaking into our house directly, the guy downtown at the bank who sold Kevin’s dad a subprime mortgage gets away more or less unseen, and Home Alone becomes Home Foreclosed.

Grandiloquent metaphors aside, notice the number of competing ideologies in society. Everyone is vying to say their part of the elephant is correct, but in reality, they’re all partial answers taken way outside the domain of utility.

How do we make sense of this?

First, we have to dis-identify with our perceptions. Most of the time, we believe things because they benefit us in some way, or perhaps because we derive some benefit of identity from holding said beliefs. If you’re a poor person, you’re more likely to believe that inequality is systemic, while if you’re a self-made millionaire, you’re more likely to believe that wealth comes from hard work. If you’re born rich, you’re probably inclined to believe that we should keep the filthy poors out of your gated community in the Hamptons, damn it, they’re driving the housing prices down and scaring the help.

To do this, we have to reconsider our identity in light of what we’re trying to do. If you’re attached to a belief, you’re going to treat it like it’s a part of your body and if people attack it, you’re going to perceive it as a threat to your life. This is demonstrably true if you’ve ever watched a person on either side of the political spectrum get triggered, by the way, it’s not just for the libs.

What does an identity that is resistant to ideology look like?

“I am the wisest man alive, for I know one thing, and that is that I know nothing.”

We can contrast this with David Goggins, who said:

“I’m not the smartest kid in the world. Okay, instead of somebody saying; ‘Oh no, you're smart. Oh no, no, don’t say that to yourself,” I said to myself; ‘I’m a dumb motherfucker.’ Okay, roger that, how you get smarter? Educate yourself.”

The human mind is capable of seeing through many lenses, so long as you can learn to switch between them. In a world of increasing complexity, single lenses don’t cut it. You need to be detached from ideologies, because while it’s stupid to think that one is completely right, it’s even more foolish to think that all the others are wholly without merit.

Even a broken clock is right twice a day.

Learn to look at the world through many eyes, consult all the blind men, and then ride that goddamn elephant across the alps.