Myth and Meaning II: To Kill the Demiurge Within 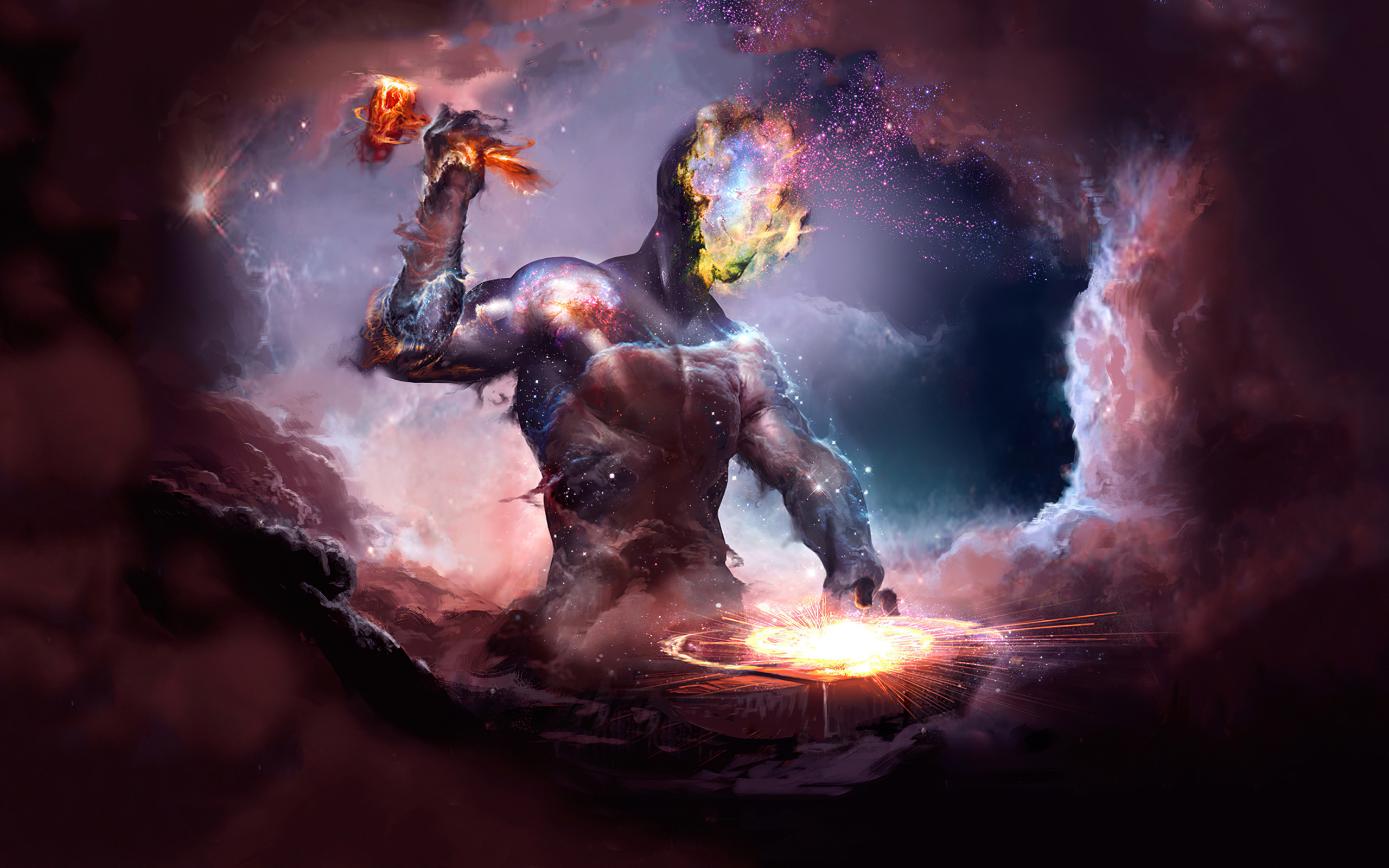 Today we’re going to be looking at what I consider to be the most fascinating mythology (that isn’t Norse mythology, because Ragnarok is completely badass)- Gnosticism, and how it relates to the Self. While there are a number of fatal objections I have with the Gnostic philosophies, it has a number of really fascinating ideas and gorgeous imagery that can be taken away and turned into something useful. The name Gnosticism comes from the Greek word gnosis, which means knowledge,” and the religion is based around the attainment of the true gnosis, which we’ll explore in more detail. First, however, we need to start with the Gnostic creation story.

Gnosticism begins with their idea of God, usually called the Monad (meaning the One). Some of the other names used are Aion Teleos (“The Perfect Aeon”), He Arche (“The Beginning”), and the Absolute. This Monad is the highest of all things, comparable to the Kabbalah’s Ein Sof (“unending/infinite”), the Hindu Brahman (something like “the unchanging reality in and beyond the world”) and Atman (the true essence of the individual, very similar to my use of True Self), the Logos, the Apeiron (lit. “boundless”), and so on.

The Monad “resides” in what is called the Pleroma (lit. “fullness”), the pleroma is meant to convey the totality of God, the divine completion, etc. The idea of the pleroma is essentially like the “ideal realm” that supersedes reality, which our world, the Kenoma (lit. “emptiness”) is a pale echo of. Now, the Monad, in its pleroma, emanates (from Latin emanare, lit. “to flow or pour forth from”) increasingly lower levels of reality, all guided from the divine principle of the Logos.

These emanations take the form of aeons, paired as syzygys. Depending on the different system of Gnosticism, they’re named and ordered differently, but they represent dualistic concepts representing the nature of the higher realities. I won’t go through all of them, but we’ll touch on some of the important ones.

The highest syzygy is comprised of the aeon Bythos (lit. “depth/profundity”) who conceives of either Sige or Ennoia (lit. “silence” and “idea,” respectively) within itself, forming the first pair. From this is emanated the next syzygy of Nous (lit. “mind”) and Aletheia (lit. “unconcealedness,” used as Truth [which I expand on here]), and from that syzygy comes the aeons of Logos (lit. “word” or “reason”) and Zoe (lit. “life). The rest of the syzygys and their respective aeons aren’t as interesting, and there are 30 total, so far too many to cover here, except for the very last one.

This is where things get interesting.

The lowest of all the emanations is Sophia (lit. “Wisdom,” where we get the word philosophy, “philo-sophia” or “love of wisdom”). Sophia falls (in the same sense of the fall of Man from Eden) from the Pleroma, although what exactly causes this fall changes with each Gnostic school. Carl Jung considered Sophia to be the highest form of the Anima (the unconscious feminine) archetype. She falls because of some mistake or failing, and one of the results of this is that she ends up emanating without her partner in syzygy.

What ends up being created from this imperfect emanation is called the Demiurge.

Sophia is ashamed of what she has created, so she conceals the Demiurge in a cloud where no one can see. Because of this concealment, the Demiurge is ignorant to Sophia and the higher levels of reality, and thus considers himself to be the God of the World. He begins to create a world that (unconsciously) is a recreation of the higher reality of the pleroma, and thus we have the material world of Man. In a sense, we could say that the Monad is the true God of the Tetragrammaton (YHWH, more commonly Yahweh), and the Demiurge is Jehova, or the God we see in the Old Testament.

Because the Demiurge has a portion of the Divine Spark (a shard of God that all things possess), Man also possesses this Spark within him. This Spark yearns to be reunited with the pleroma and escape the flawed material world of the Demiurge, which is the fallen world we inhabit. The Demiurge is known by several names, most commonly Yaldabaoth (could mean “Son of Chaos,” but this is disputed), but also Samael (“Blind God” in Hebrew) and Ariel (“Lion of God” in Hebrew, considered his “perfect” name).

The idea here is essentially that the Demiurge goes about creating the world in the way that we’re familiar with in Genesis, but because of his flawed nature, Man is also doomed to be flawed. This is all because Sophia didn’t wait for her complementary aeon- Christ.

This is a different concept than the traditional Christian idea of Christ, however. Christ, here, is a perfect divine being sent from the higher realm of the pleroma to mend Sophia’s relationship with the Light and bring knowledge of the pneuma (lit. “spirit”), and who enters our world, the kenoma, to teach people how to achieve gnosis and return to the world of spirit.

A symbolic depiction of gnosis as seeing beyond the realm of the Demiurge.

This is the first major thing I really love about Gnosticism (and very similar to the Hindu and Buddhist notions of enlightenment)- the idea that achieving a state of gnosis (knowledge) is the highest goal, and that through the attainment of this goal, salvation is reached. Obviously, I don’t support the vast supernatural cosmogony that I’ve laid out, but you should know by now that these stories are generally symbolic of an internal process or a metaphorical understanding of things.

Now, because Gnosticism is a number of different schools, what I’ve laid out here isn’t necessarily accurate to all the schools or to any one in particular. What I’ve tried to do here is to make a simplified, coherent narrative that I can use to explain a deeper idea, and that’s what we’re going to get into.

I really like the notion of the Monad. As I briefly touched on, I consider the Hindu idea of the Atman (something like the idea of the Divine Spark) to be roughly equivalent to my conception of the True Self. In Hinduism, liberation (enlightenment) is attained by realizing (through gnosis) that the Atman (Divine Spark) is the same as the Brahman (Monad), and that is more or less equivalent to the way I see it.

However, this brings me to my first massive objection to Gnosticism- the notion that the world is inherently evil and ruled by an evil deity that is ignorant of the higher reality. This is a philosophical objection, because my philosophy is not built around the idea of denying or escaping reality (that means you, Buddhism). That being said, this is actually a really interesting and useful perspective from a metaphorical standpoint- we have to imagine the Demiurge within ourselves.

In this metaphor, the Monad is the True Self, the pure consciousness that is the core reality of being, the “I Am that I Am,” the quality of “is-ness” and “divine spark” that all people possess. This comes from the depth or profound nature (Bythos) of being from which silence and idea emerge within. You can actually think of silence and idea as the two opposite basic states within one’s own mind- and the next syzygy emanated is, of course, comprised of mind (Nous) and Truth (Aletheia).

The interesting bit about these increasingly emanated syzygies is that they both echo a kind of progression of emerging phenomena and also outline a ladder to go from our less-conscious reality to approach the highest realization of the True Self.

We come to the bottom, which is wisdom (Sophia). Wisdom tries to create without its partner, which is the embodiment of the divine principle (Christ, the Logos), and because of this, it creates something that doesn’t know about the higher levels.

This lower level created is the undifferentiated self (a person’s identity before they develop an understanding of the petty ego, Ego Proper, and the True Self), which is also a primary identification with both parts of the ego.

What this means is that because a person has “wisdom” but has not achieved an embodiment of the Logos (some people use the phrase “Christ-consciousness,” but I feel that’s a loaded term and not very specific) through the knowledge of the Self, they have a false understanding of who they are. This identity created from this ignorance is fundamentally flawed, and it will result in suffering (i.e., the fallen nature of the world).

The idea of Christ descending from the pleroma to reconcile with Sophia is actually something like a double metaphor. In one sense, it’s the idea that some kind of insight or intuitive experience arises that introduces the person to the “divine” nature of their True Self, prompting gnosis. In another, it’s the idea that the crucifixion of Christ is a symbolic expression of the identification with the “mortal” ego being sacrificed (ego death, the conclusion of the Dark Night of the Soul, confrontation with the Shadow, Nietzsche’s idea of the Desert) to allow the identification with the “undying” True Self to be born. (The Gnostics believed that the crucifixion was an allegory called the “Outer Mystery,” rather than a literally true (veritas) event.)

This metaphorical concept is why I like Gnosticism so much. They’ve created such a rich and detailed symbolic language for the discussion of the Self and the world, and it can be used to paint a lot of fairly complex pictures, as I’m sure you can see from this article.

The big takeaway here is the concept of the Demiurge. While you identify solely with your ego, you are the Demiurge- the thing that doesn’t know about the True Self, the ignorant person who will fundamentally misunderstand reality as a result. What is required is for us to kill the Demiurge within ourselves, free the Divine Spark within us (Sophia, wisdom, the impulse that pushes us to question things), and reunite that spark with the Monad (change our identification from the ego to the True Self), at which point we become the Logosome, or the vessel of Reason in the world, having conquered ignorance.

I know this was a very dense article, but what I’m trying to to do is start to break down some of these very abstract concepts for later discussion and simplification. If you’ve made it this far, excellent work, you’re well on the way to gnosis yourself. If I’ve been confusing, or if I haven’t explained something properly, let me know and I’ll try to expand on what I’ve started here.

Go forth and seek gnosis, and kill the Demiurge within yourself.