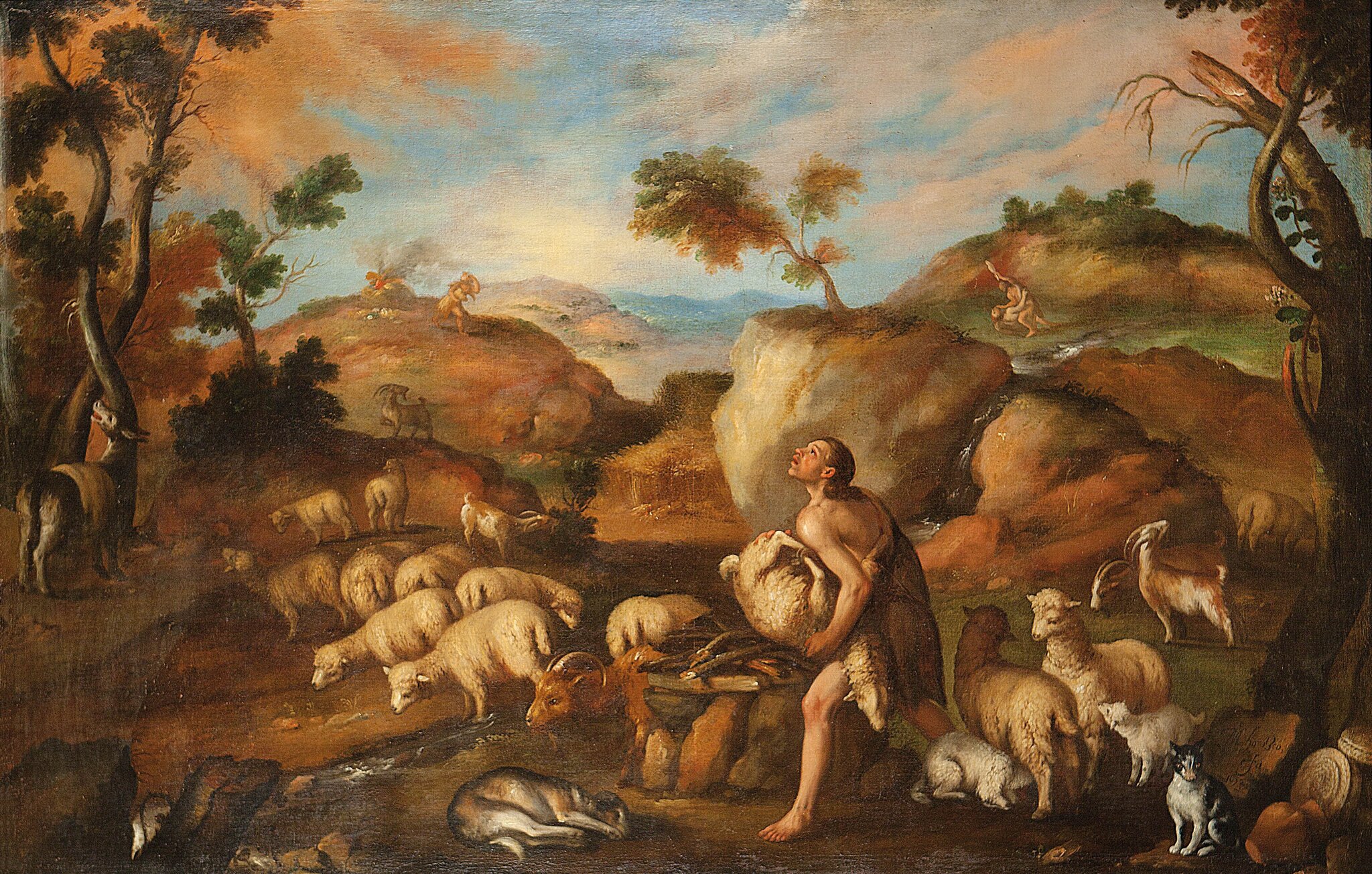 Hello again, friends, it has now been two weeks of meat on the Carnivore diet- halfway there. I don’t have too terribly much to report this time (still feeling great, getting up early, and full of energy), so this week I figured I would talk about something that’s been stuck in my head since last week.

When I was reading the book (The Fat of the Land by Vilhjalmur Stefansson) I discussed in the most recent chapter (linked above), something really stood out to me- Stefansson brought up the story of Cain and Abel in reference to the Carnivore diet. Now, if you’re familiar with me or this site, you’ll know I’m all about exploring religion, mythology, and history for deeper meanings, so that’s what we’ll be getting into today. Anyway, I’ll abridge Stefansson’s passage (112-115) as follows:

“A preference for meat foods, if not a prejudice against the others, can be traced through the history and literature of mankind in every age, clime and country. Except for wine which is from the kingdom of vegetables, the highest praise of Greek poetry, particularly the Homeric, is for meats. The same indication of preference runs through the Bible. What is said in Genesis, IV, 2-5, is considered more fully in a later chapter: that the Lord was not pleased with Cain when he brought an offering of garden produce but was pleased with Abel when he brought some fat mutton. This led to the tragedy in which Cain the gardener killed Abel the shepherd, foreshadowing that bitterness which the vegetarians still feel against those who persist in the eating of sirloins and chops.

…the first reference to fat in the Bible shows both the preference of Jehovah for meat over garden truck and for fat meat over lean. It is in the fourth chapter of Genesis, from the second to the fifth verse: “And Abel was a keeper of sheep, but Cain was a tiller of the ground. ‘And in process of time it came to pass, that Cain brought of the fruit of the ground an offering unto the Lord. And Abel, he also brought of the firstlings of his flock and of the fat thereof. And the Lord had respect unto Abel and to his offering. But unto Cain and to his offering he had not respect.’”

Aside from the (hilarious) comment about vegetarians (and more specifically, vegans- don’t act like you don’t know who we’re talking about), this is a really fascinating concept. To tie things back to the guy that got me into the carnivore diet, Dr. Jordan Peterson himself has devoted a significant amount of time to extracting the meaning out of the story of the first murder- but what if it isn’t so complicated?

If you have the time and interest, I highly recommend Peterson’s series of biblical lectures- the Cain and Abel episode is linked here:

However, if you don’t have the time, I’ll summarize Peterson’s thoughts on the story:

The good doctor proposes first that, in order to internalize the concept of sacrifice (his definition of sacrifice being the denial of a short-term pleasure to receive a greater long-term gain), Man first had to sacrifice in the physical realm to ensure a good outcome. Based on this premise, Abel is viewed by Peterson as someone who is an upstanding, moral, hardworking, hard-sacrificing guy, and Cain, on the other hand, is the opposite- resentful and bitter, and a maker of bad sacrifices.

To quote the above video (in reference to why God rejected Cain’s sacrifice):

“You don’t know why that is. This is a built-in ambiguity, I think. I think there’s textual hints, but I’m not sure. “Abel brought the firstlings of his flock and of the fat thereof.” Ok, so what does that mean? Well, he brought a high-quality sacrifice. You don’t know that Abel’s sacrifice is low quality, because it doesn’t say that, you know, Abel brought God some wilted lettuce and then burnt it. It doesn’t say that.

But there isn’t a sentence, there, that talks about how high quality Cain’s sacrifice is. But, in any case, the Lord has respect unto Abel and his offering. So there’s a hint that Abel’s putting a little bit more into the whole sacrificial thing than Cain. But there’s also a hint that, maybe, God is just liking you a little better than he’s liking him. That’s, I think, useful from a literary perspective, because there is that arbitrariness about life.”

This is where things get interesting- we can reference from Jewish rabbinical law (which would have similar principles regarding sacrifices that harken back to this incident) what constitutes a good sacrifice. In the same passage by Stefansson referenced earlier (113):

“The Hebrews distinguished between the suet or pure fat of an animal, and the fat which was intermixed with the lean (Neh. vii, 10). Some parts of the suet, viz., about the stomach, the entrails, the kidneys and the tail of a sheep, which grows to an excessive size in many eastern countries, and produces a large quantity of rich fat, were forbidden to be eaten in the case of animals offered to Jehovah in sacrifice (Lev. iii, 3, 9, 17; vii, 3, 23).

The ground of the prohibition was that the fat was the richest part of the animal, and therefore belonged to him (iii, 16).” Most anthropologists, and other students of the relation of man to his religion, seem to agree that the foods considered best for sacrifice, or generally thought to be agreeable to gods and powerful spirits, are the same as those which the people themselves preferred when the religion was in its formative stage. Genesis, then, would represent, in what it says of the preferences of Jehovah, the preferences of the Hebrew people themselves when they were living in the region of Babylonia and Egypt 3,000 or 4,000 years ago.”

In this context, we can see that Cain’s sacrifice wasn’t inadequate out of malice (unless he was holding out on giving up some prime lamb), but out of something more like a failure of choice of career. Imagine your brother coming home with a medical degree and you show up with a degree in- oh, I don’t know, Art History. Not sure about you, but I can’t see that going over well with Pops (who in this case is literally God).

What are we supposed to take from this, then? Is the moral of the story that a pastoral lifestyle is superior to that of an agrarian one, and that we should all be on the carnivore diet? It could also be that farmers shouldn’t be involved in the act of sacrifice, but I think that’s a bit more tenuous. Maybe it’s a prophecy about some sort of upcoming vegan-led armageddon, although I prefer a Bruce Willis led Armageddon, personally. Either way, at the end of the day, I prefer Peterson’s explanation, even if it doesn’t have as much of a historical basis. His notion that we first ritualize what we later internalize is the basis of a great deal of my thought in regards to myth.

I think it’s tremendously important to understand the link that connects religious rituals and external myth to the internal processes of the development of Self, and JBP is all about that. However, in this case, I think it may just be a story about the value of meat- more specifically fat. And that, ladies and gentlemen, is a story I can get behind.

Turns out Abel is up there with Ron Swanson as a patron saint of the Carnivore diet.

And the Lord said unto Cain,