Syzygy, Part I: The Emergence of the Modern Myth 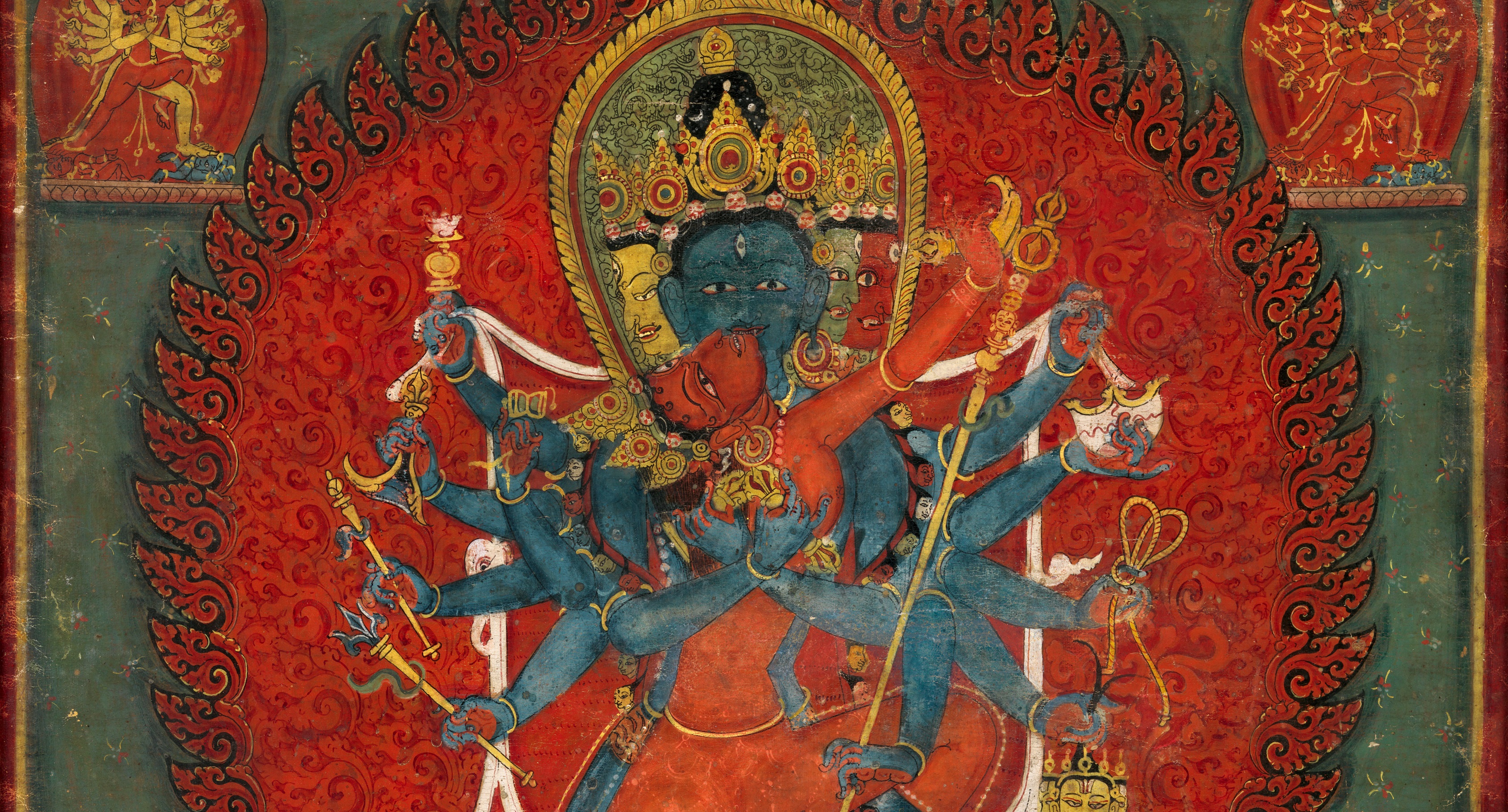 “It is a psychological fact that as soon as we touch on these identifications we enter the realm of the syzygy, the paired opposites, where the One is never separated from the Other, its antithesis. It is a field of personal experience which leads directly to the experience of individuation, the attainment of the Self.”

There exists a mythological, archetypal symbol that is present in essentially every culture, but somehow this concept remains largely unknown. This archetype is known as the Syzygy, or the united opposites. You have certainly seen this symbol before in the Yin-Yang or the Star of David:

Aside from being a 21 point word in Scrabble with no vowels (you’re welcome for that), the syzygy represents the inseparable nature of opposing concepts, most specifically masculine and feminine. We’re going to be analyzing the concept through two lenses (which I think you will find are markedly similar)- first, through the emergence of the syzygy myth, then through the personal experience of the concept in a practical way as it refers to the understanding of the Self.

To reach the emerging myth of the syzygy, we must first begin with the earlier stages of myth. These stages are more like overlapping eras, although there is an apparent progression from the less developed to the more developed. The primary stage, so far as I can see, is animism, or the belief that all things have an inherent spirit or essence. For the sake of this article, we won’t go deeply into animism, although I will theorize that the purpose of animism is to develop the distinction between separate concepts in the mind through ritual.

Next came the development of polytheism, or the pantheon of gods. This phase is most easily represented with the Greek (and Roman) pantheon, with the many gods representing distinct phenomenon in the world. It would seem that the attribution of personality to these natural processes was the ritualization of an attempt to understand their workings. As a result, as human knowledge advances, the pantheon retreats into obscurity. There isn’t much use for a thunder god if one sees the storm as a material occurrence rather than divine wrath.

As the pantheon retreats, the monotheistic god emerges. It’s very likely that the “one true god” appears as the last man standing between the competing tribes and their personal mythologies. What remains after the fight is a catchall deity who is impassive and wrathful, as nature is a cruel mistress. The randomness of life and the mysterious workings of the world can be justified with a god that observes and punishes, but also one who rewards the virtuous. To greatly simplify Jordan Peterson’s thoughts on the topic, ethics and our conceptions of the divine are in fact a system of rules that encourage the best possible outcome. Obviously, no one can win all the time, but an ethical person (servant of god) is rewarded, even when tested to extremes (like Job).

We can observe the change from the wrathful monotheistic deity (of the Old Testament) towards the kinder, personal deity who “is love” (in the New Testament). From a functional perspective, the outcry against Jesus of Nazareth by the Jewish priest class, the Pharisees, actually represents the failure of the old myth to address the changing world. As a result, an innocent man was put to death for violating the overcomplicated religious rules of the Pharisees.

The fundamental change in the myth is represented best by Luke 17:21 (KJV),

“Neither shall they say, Lo here! or, lo there! for, behold, the kingdom of God is within you.”

The Pharisee belief was rooted in the physical realm, so their interpretation of Jesus was that his declarations about kingdoms referred to the tangible world. However, what Jesus effected was the creation of a personal deity- a god for the individual, rather than the people.

This myth, however, met its match after the Enlightenment era. As a result of our increasing development of the sciences, we lost the ability to have a genuine faith in a higher power that does not require disagreement with science and a rejection of the world. This is explained best with Nietzsche’s famous quote:

“God is dead. God remains dead. And we have killed him. How shall we comfort ourselves, the murderers of all murderers? What was holiest and mightiest of all that the world has yet owned has bled to death under our knives: who will wipe this blood off us? What water is there for us to clean ourselves? What festivals of atonement, what sacred games shall we have to invent? Is not the greatness of this deed too great for us? Must we ourselves not become gods simply to appear worthy of it?”

As Nietzsche’s life (and eventual death) would prove, the death of God here is equal to the rise of nihilism as the ruling philosophical problem. Nihilism is the scourge of the age- having lost God as a central source of meaning, we have entered a cultural Dark Night of the Soul. Nietzsche believed that we could conquer nihilism with the creation of a new system of values, or a “transvaluation.” However, he failed to accomplish this, and I believe that his attempts are what killed him.

I suggest that the religion of Christianity, the Enlightenment, and even Nietzsche failed to understand the actual purpose of the myth of the Christ serves. First, we have to deconstruct the myth a bit- the common interpretation is that Jesus of Nazareth, an innocent man, was sacrificed by his divine father to absolve the sins of mankind. This presents a few massive issues-

To understand this interpretation, one must understand the tradition of the use of sacrificial scapegoats. In ancient Judaism, on the Day of Atonement, the community would cast lots to determine which of two goats would be sent out into the desert to carry away the sins of the village. Philosopher Rene Girard noted that humans tend to single out an individual to blame for all the issues of a community, who is then punished. This punishment alleviates the collective tension, and the individual who is executed is often then deified, and the cycle restarts.

The fundamental failure of this (the old system) is in the belief of external ritual as a means to effect change in the world. Because of this system, we can rationalize the torture and murder of an innocent man as somehow necessary, and that it was God’s will only adds to the horror.

Let’s reframe the incident as a tragic misunderstanding, and we enter the second phase of this investigation.

“Father, forgive them; for they know not what they do.”

There are two parallel realities that we inhabit- profane, linear time (represented by the Greek titan, Kronos) and mythical, sacred time (represented by the Greek god, Aion). In the profane world, we had an innocent man tortured and murdered needlessly, but in the mythic world, the Pharisees were actually enacting a different ritual than simply scapegoating. This is the myth that Christianity brought into the mainstream- the dying and resurrecting God. There are a number of pre-Christian examples of this, including Osiris, Dionysus, and even Odin’s sacrifice of himself to himself by hanging on the world tree, Yggdrasil, could be compared.

However, I pose the (likely controversial) perspective that the physical ritualization of the murder of the Christ is actually the profane equivalent of what should be an internal process- the death of the innocence of childhood to engender the rebirth of the individual as an adult, knowing, and reckoning, both good and evil. This, like the willing sacrifice of Jesus, must be voluntary on the part of the individual, and is inevitable, as it is commanded by God himself.

Again, we return to the statement, “the Kingdom of God is within you.” This would seem to be the true secret to the teachings of Jesus, insofar as it changes the narrative from an exoteric view of the world to an esoteric exploration into the simultaneously divine and profane nature of being.

This is where the myth of the syzygy enters the fray. We can harken back to a story Plato told of the origins of humans, where they were created having four arms, four legs, and two heads. Zeus feared their power and split them, condemning them to search for their missing half, which Plato called the soulmate. I think this is actually the mythologizing of the prehistoric change from asexual reproduction to sexual reproduction and the instinct that drives pair bonding, but that may be a bit of a stretch.

Nevertheless, as it is we are gendered individuals in a world of sexual reproduction, fundamentally incomplete, in at least a biological sense. This is where we draw the myth of the syzygy from- the desire for oneness, completion, and the transcendence of the duality of the profane world. However, it was with the shift towards an esoteric divinity that Christ gave us that truly opened the gates towards the attainment of this nondual state. However, due to the immense historical power of the religion of Christianity (as distinct from the teachings of Jesus of Nazareth himself) that the path is made obscure.

“Because strait is the gate, and narrow is the way, which leadeth unto life, and few there be that find it.”

There is a quote from chapter 24 of the Gnostic Gospel of Thomas (not part of biblical canon) that reads as follows:

This is very clearly a reference to the development of the syzygy, especially if we understand that the kingdom is within. This, however, is where we leave the realm of pure mythology and enter that of the practical quest for Self, which we will continue in the second half.