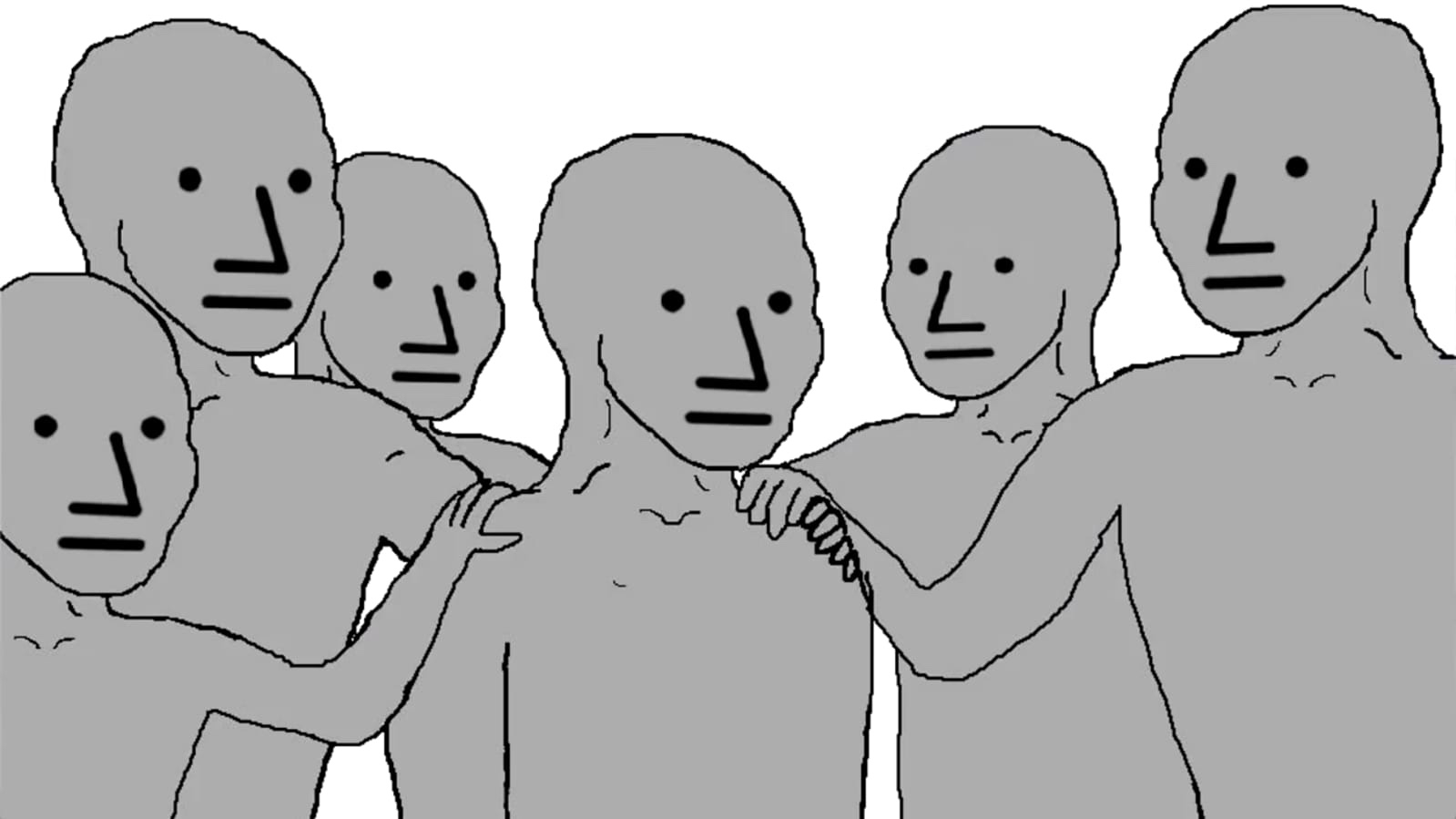 Watch out pardner, there’s a new meme in town. If you haven’t had the pleasure of being introduced yet, meet the NPC meme. It allegedly originated on 4chan, but the real groundwork was done on Twitter by @thefaceberg. (Speaking of Twitter, shameless self-promotion- follow me @libera_rex.) This meme would prove to be probably the most devastating usage of memetic engineering to psychologically traumatize people on the internet that I’ve personally ever seen. Let’s get down to it.

First off, let’s establish the basis of the meme.

The premise of the NPC meme is the proposition that a large number of people in the world lack an “inner monologue.” This can be construed as either a personal sense of agency, free will, volitional thought, or some other permutation of that idea. If you haven’t played enough multiplayer video games to know, NPC stands for Non-Player Character. These are characters that you interact with who have a limited series of scripted responses. They don’t do anything besides what they’re literally programed to do. That’s it.

The meme suggests that these large number of people in the world without the inner monologue are actually not “real,” in the sense that they don’t have the capacity to do anything other than what they are taught. In a separate article, I’ve called the trait they lack metaconsciousness, or the capacity to observe the workings of one’s own mind and act on that information.

As you have either observed or could have guessed, this meme rapidly became political in nature, generally suggesting the left is entirely comprised of NPCs. I will not be getting into the politics, for reasons I have outlined before, but we can use this as a great lens with which to view individualism and collectivism.

At its root, the NPC meme is commentary on the apparent nature of collectivistic groups and their thought patterns. The more a population tends towards collectivism, the greater the internal pressure to maintain homogeneity of thought will be. As a result, tension caused by divergent opinions will increase to the point of being ridiculous.

Any collectivistic ideology is built on a foundation of some sort of reality-assumption. Because, by nature, humans are individuals, these foundations will be inherently flawed, and the larger the groups become, the greater these flaws will clash with reality. This is the exoteric equivalent of cognitive dissonance (metacognitive dissonance, if you’ve read my article on the three metas). Because the nature of an ideology is to maintain its established system of order, the rising degree of dissonance will result in an increasing pressure to commit to the group ideal.

It’s the most deviously effective weapon against the collectivistic ideological forces I have ever seen.

Obviously, there’s been an insane amount of pushback. The defensive premise established by the people who don’t see the meme as funny is that it’s dehumanizing. Now, if the meme had originated as a political weapon (it didn’t) and had called for violence (it doesn’t), I could see that. However, the most fundamental premise of this meme is that if you can take it as a joke, it doesn’t apply to you. The fact that people cannot (willingly or otherwise) understand this simple fact about it is the root of this response to misinterpret it as a dehumanization mechanism.

I would argue that the very nature of collectivistic thinking implies that those who are party to the beliefs either have a vastly different concept of what individuality means, or they have had their capacity for individuality suppressed in some manner by groupthink. There is some psychological barrier that prevents the requisite level of reflexive self-awareness from occurring- “That’s not me, I’m not like that.”

It seems the cogdis defense mechanism that is activated by the initial ghost of the thought “This is about you,” responds by immediately attempting to discredit the “accuser.” I think this speaks to the nature of the collectivistic sense of identity. Their self-concept is built around the beliefs of others, rather than internal structures of value. As a result, when threatened, the logical response of their exoteric self is to attack the exoteric self of the “accuser” with some label. This is because their self-concept is simply a (non-Discordian) hodge-podge of collected labels and ideologies, gathered from their group.

Frankly, collectivistic self-construction reeks of narcissism. The narcissist is fundamentally a person who has been damaged somehow, and the damage presents as an internal dearth of self-esteem. Now, a healthy self-concept allows one to examine this wound, deal with it, and heal. The narcissist is born when, instead of healing, the wound is ignored. This becomes what I’ll call the Void (compare to Nietzsche’s concept)- when ignored, the lack of internal esteem ends up being perceived as an unfillable hole (it isn’t, obviously). The response to this is the creation of the Porcelain Mask (ironically, look at the visual aspect of the meme).

(The Porcelain Mask is honestly pretty similar in concept to The Picture of Dorian Grey. If you’re unfamiliar, that book talks about a dude who makes a deal to be young forever at the price of never looking at a painting of himself, eventually he does and it’s so horrific that he dies. Take that, Cliff’s Notes.)

Anyway, the Mask is made of porcelain because it’s insanely fragile. Any perceived slight causes the mask to chip and crack, and any gap in the mask makes the void visible again. When the narcissist experiences this, they will lash out in self defense, then seek some kind of social validation- tape for the Mask. The tape can be any kind of compliment- if you see people fishing on social media, this is tape-seeking behavior.

Now, the clinical concept denotes that narcissism is a personality disorder. I think we can make an interesting distinction here. Personally, I think narcissism is a normal stage in human development- it’s the great trauma of realizing personal inadequacy and the instinctive response to self-protect rather than grow. It only becomes clinical when it becomes terminal, and in my experience, once the Mask is created, it certainly seems terminal. Another Catch-22: the degree of narcissism required to create the Mask is exactly the amount required to prevent any possibility of the Void being confronted.

This is the vicious cycle that the NPC meme represents- the increasing levels of tension created by dissonance fosters a more and more extreme response. The worldview continues to warp until distortion is unmanageable.

I think that we’re living in the end stages of this distortion. The greater Mask our culture (which is incredibly narcissistic) has been wearing is essentially a mass of porcelain flecks, dust, and industrial-grade duct tape by now. It’s the Ship of Theseus, but in a much lamer and more miserable sense.

However, the point at which the delusion becomes unsustainable (rock bottom, the inevitable failure of the mask) is the place where growth happens. When we realize, individually (no one ever realizes anything useful collectively), that the Void is not a void after all, but a great, festering wound calling out for treatment, then we can begin to heal.

Or we can just ban people who post the memes, right?