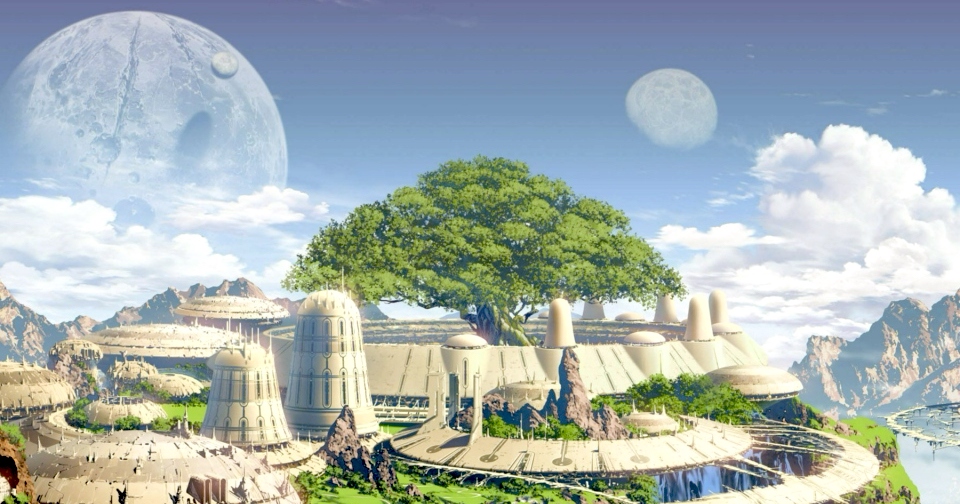 We probably got off track as soon as we started making the distinction between people and animals.

I tend to think that as soon as we did this, we separated ourselves from nature. Perhaps this can be traced back as far as the fig leaves that Adam and Eve hid behind in Eden, but at any rate, it’s a problem.

Even a well designed office building tends to have some element of the architecture that resembles a prison- most skyscrapers are big metal cages, after all. On the other hand, there’s not a forest in the world that looks like a jail.

Very rarely do human designs approximate the intuitive wholeness of nature. Did you know that spiders can’t reasonably get much bigger than they are now because of the size of their lungs? If the fact that the laws of physics actually prevent freakishly large spiders from existing isn’t evidence that we live in an ordered universe with some degree of compassion isn’t enough for you, I don’t know what is.

People are perhaps as orderly but rarely as compassionate. We’ve invented a great deal of terrible things, like chemical weapons and cubicles.

Is that a weird comparison? One is horrifying in the short term, while one is effectively the sort of design that transforms your long-term life into a nightmare, so I’d be willing to say it’s not a totally insane point of reference.

We can use cubicles as a jumping-off point here. I find the cubicle to be representative of the mental illnesses endemic to the business world- the naive desire to make everything follow strict rules and be boxed in. Yes, I know that those Japanese farmers grow watermelons in boxes, but next to nothing in the real world works like that.

We really, really want the world to work like these square watermelons- that’s essentially why cubicles exist.

“If I can just put people in these boxes and control all the variables, then everything is going to work out consistently for the rest of time.”

Unfortunately, while humans and watermelons may be similar colors on the inside, people don’t work as well when squished into weird shapes, physically or otherwise. The world is dynamic! Things need to move and breathe and run and change and act unpredictably. That’s how the world works, and that’s what causes life to grow.

Our worldview is ultimately drawn from our cultural predisposition towards the rational mind- now, this isn’t to say that rationality itself is a bad thing, (although I’m perfectly willing to consider that possibility,) just more that our naive sort of rationality is running the show here.

Let’s look at the difference between a biological hierarchy (the human body) and a human hierarchy (a human business) for reference here:

At the lowest level of organization in a human body, we have some quantum nonsense undergirding subatomic and molecular structures. From the organic molecules, we get complex things like amino acids, RNA and DNA, organelles, cells, organs, bodily systems, and ultimately a whole-ass person.

Now, people, on the other hand, come in a spectrum that includes (but is not limited to) half-ass, whole-ass, smart-ass, dumb-ass, and at the risk of belaboring this bit, many more sorts that I can’t be assed to list here.

When people build systems, we tend to work in exactly the wrong direction. We structure our government to be the strongest at the top of the hierarchy, our businesses have the most power in the C suite, and basically everything runs from the top-down.

Do you have any say in the way that your cells divide? If your heart beat was your responsibility and not an automatic reflex, how long could you keep it beating before you got distracted and died? If you had to be in charge of ATP production, would you even know what to do?

Pyramids are built from the bottom up. Trees grow skyward from the ground. No person begins with consciousness and then constructs themself a body to house it- in fact, by the time you realize you’re conscious, your body is already there.

It’s because of our belief that we’re somehow separate from our bodies- that we’re not also a part of nature, that we lose this critical context that makes the world make sense. Descartes’ “I think, therefore I am” stands as a particularly foolish statement here- he’s only capable of saying this if his lungs function and the cells in his vocal cords aren’t rebelling against him among a host of other processes that were developed and perfected long before he had any thoughts on the matter are working in perfect order.

A holon is something that is both a complete whole as well as a part of a larger system- for example, a meme:

All of these memes are part of the larger complex of memes contained within the original meme, but each is a joke by itself as well. To compare, you’re a standalone person, but you’re also a part of your family, your community, and humanity as a whole- people are holons, too.

Remember, natural systems are built from the bottom up, and that logic should apply to people as well. You can’t make a team out of people who aren’t functional individuals, just like you can’t build a house out of boards that can’t hold themselves together.

I tend to think holons are the functional equivalent to the more theoretical fractals- while nature doesn’t really have perfect fractals because we don’t live inside of a giant crystal, it is full of holons. Nearly every system can be understood with the lens of holons because holons are one of the only concepts that really distinguish between the whole and the sum of its parts. People tend to pick one or the other (ie, they miss the forest for the trees,) so understanding that things are simultaneously distinct as well as inseparable from their environment is a more nuanced way of looking at things.

What are the major takeaways here?

For homework, go find some holons and reflect on the bad design of modern office buildings.