Integration and Dissonance: Sculpting a Coherent Self 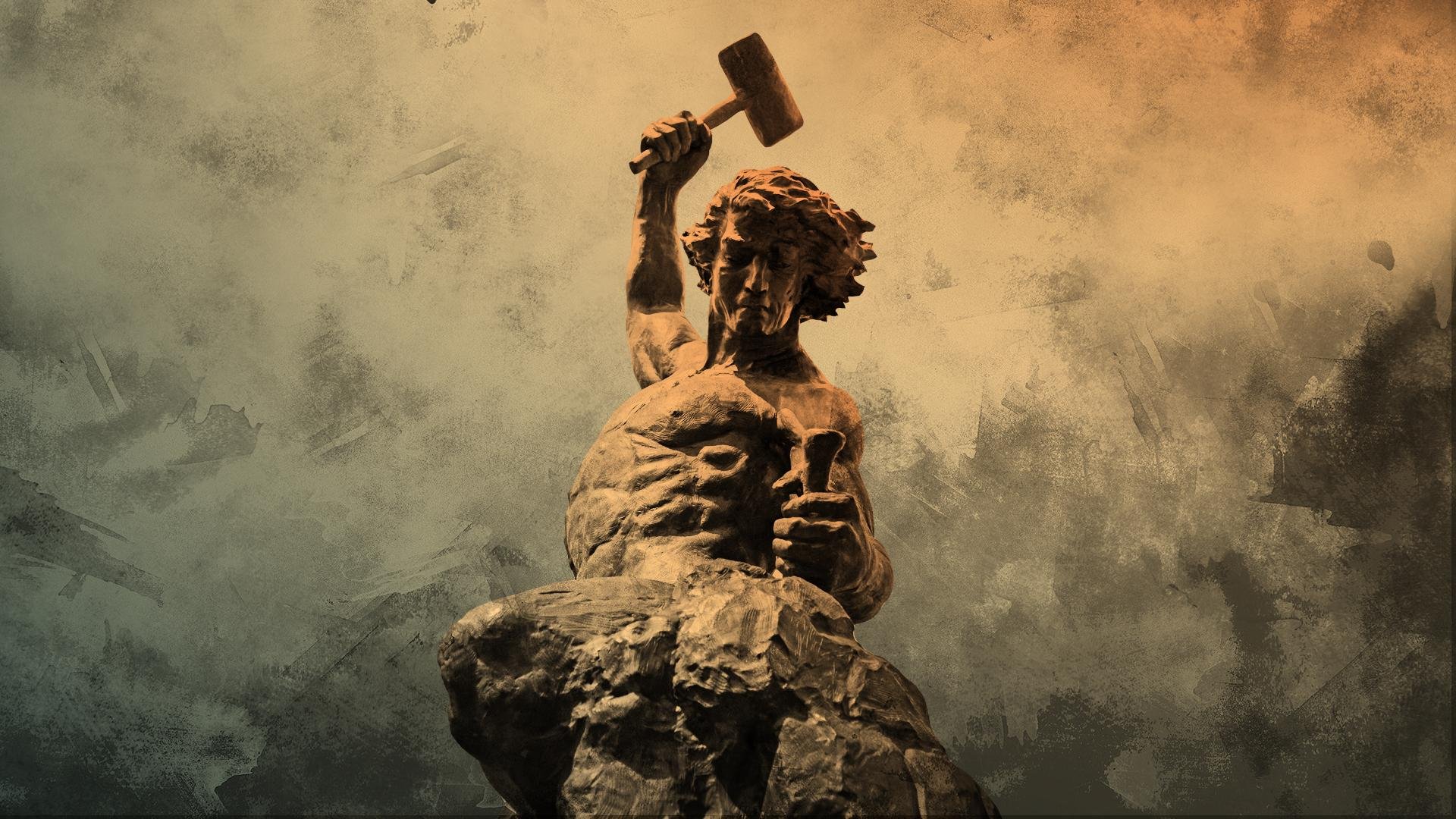 Today we’re going to talk about two (very related) subjects that I’ve been meaning to write about for some time: integration and dissonance. Integration is, in a sense, the true nature of what self-mastery is, and dissonance (more specifically, cognitive dissonance) is the means by which we are spurred on towards integration. Let’s begin by setting the tone-

The cover image (above) for this article is an edited picture (source) of the phenomenal sculpture “Self-Made Man” by Bobbie Carlyle. While I can’t be sure, I have a feeling that this quote may have had something to do with the origin of the sculpture:

“To progress again, man must remake himself. And he cannot remake himself without suffering. For he is both the marble and the sculptor. In order to uncover his true visage he must shatter his own substance with heavy blows of his hammer.”

Finally, I offer this quote from Ayn Rand’s masterwork on the nature of the integrated man, The Fountainhead, spoken by the novel’s hero, architect Howard Roark:

“No two buildings have the same purpose. The purpose, the site, the material determine the shape. Nothing can be reasonable or beautiful unless it’s made by one central idea, and the idea sets every detail. A building is alive, like a man. Its integrity is to follow its own truth, its one single theme, and to serve its own single purpose. A man doesn’t borrow pieces of his body. A building doesn’t borrow hunks of its soul. Its maker gives it the soul and every wall, window and stairway to express it.”

Much of what I’ll be covering today ties into an article I wrote recently about the purpose and theme of one’s life, and if you’re really clever you might have guessed by now where the inspiration for that came from. If not, I’m not telling.

Within the core of your being, there is something that your spirit screams out to do. This is your purpose- this is the force that seeks to change the world and rectify the chaos into order. It is an echo of the generative force of creation that resounds within you. Because this is fundamentally an ordering force, as the echo resonates, it will cause those components of you that are not in harmony to become dissonant.

It is in this manner that we may determine where to start working.

Cognitive dissonance is the unpleasant feeling of tension created when the mind is introduced to a novel concept that conflicts with the pre-existing network of concepts within the self. Now, as I’ve touched on in the Pieces of Mind series, the petty ego represents things within the self that can be changed, while the Ego Proper is the foundational core of your being. It is from this unchangeable foundation of your personality that we have to build on. Because of the nature in which this core resonates, the self that you construct must be build in such a way that it either matches the frequency of the foundation, or it operates in harmony with it.

Consider the Taipei 101 skyscraper, formerly the world’s tallest. Within it is suspended a 660 ton steel pendulum- a mass damper. This functions to offset the massive gusts of winds that would normally destroy a building of its size. However, because the damper serves to balance these forces in harmony with the movement of the building, it can respond to an otherwise destructive event by flexing appropriately.

The tree that does not bend will break. In this case, however, we’re building something far larger than a tree, so we can’t simply learn to bend. The important thing here, though, is that we can understand any of the forces that may end up acting on us- reality is the barometer by which we’re going to anticipate storms.

Let me simplify that. The only thing that can cause the self to break is reality, and the only thing that can prevent the mind from mending is willful ignorance (the origin of evil). Cognitive dissonance is the expression of the mind’s desire towards order- your being longs to be complete. This drive towards order is both the expression of the generative principle and the core mechanism of life. Even more simply- if you know your Self, and the person you are is built on reality and this knowledge, the world will not be able to break you.

This is essentially the reason that we should strive to integrate our being. Reality will break you, period. However, as volitional beings, we have the choice to do this breaking ourselves, or willfully ignore it and stand by in stupor as we are broken. This willful breaking and reformation is the process of integration.

Each time you encounter dissonance (and unless you’ve made a habit of ignoring it in the past, you will know when it arises), sit with it. Do not resist the dissonance, because as it clashes with the established harmony of your mind, it will begin chipping away at the flawed part of you that you’re clinging to. Eventually, as you analyze the new piece of information, you will let go of the old chunk of petty ego and realize something more about your Ego Proper.

The undifferentiated self is the block of marble that is the person who lacks knowledge of Self. Dissonance is the chisel that removes false ego beliefs from the underlying structure of the sculpture that is the Ego. Finally, the True Self is the theme that ties the entire piece of art together, and the principle that animates and drives the process of sculpting itself. The individual who is sculpted echoes the great generative force of being in this process- an instrument coming into harmony with the symphony of life.

Now, let’s look at disintegration, or the process that acts on those who are not integrated. Disintegration is the corollary process that accompanies integration- dissonance first breaks before it mends. A person who resists the disintegrative impulse is effectively sculpting poorly, and this resistance leads to the creation of fractures in the marble. The process is not allowed to flow normally, and because the fractures build up, the whole of the building that is the self is left vulnerable to winds, earthquakes, rain, and other weathering. With enough time, all mountains are ground down.

This is most easily seen in people whose actions do not align with their stated beliefs. Politicians are fantastic examples of this- the conservative senators who lobby against gay rights and end up being closeted themselves, the liberal senators who hate the “rich” but have three houses, the priests who take vows of celibacy and rape the innocent, the nihilists who believe human life is evil but can’t own up and end their own. What this represents fundamentally is not only cowardice and weakness, but a deep hatred for the self. It’s no surprise, considering that a person who has resisted the pains of personal change for their whole lives has never know the relief that comes from rectifying dissonance.

The self devolves from an expression of the generative principle of life to a twisted shell of a person- a cruel mockery of the good. This fear of the pain of change festers into anger at those who have overcome, and the anger becomes a hatred for everything in this world that would cause dissonance:

The hatred of the Sacred Real.

The hatred of Being itself.

The root of this, even beyond the childish desire to avoid pain, is bad philosophy- a theory of the world that is not rooted in the belief that life is good and that being can and should be beautiful. Even a noble man will be broken if he attempts to integrate a philosophy that does not agree with reality. This is why we must root ourselves in life- we must let the Truth be the guide which our sculpture follows.

I’ll close with the lyrics from the wonderful band Trivium’s song To Burn the Eye, from their debut album, Ember to Inferno. This is among the greatest examples of the nature of the disintegrated self.

“A mind lost within its own self, existing to feed its hunger.

Your body, a hollowed, empty shell, awaiting feed of the ages.

Darkness will cover the mind, casting a shade on reasoning.

Burn in your own hell: Life, a grand holding cell.

Two become as one, one become a slave.

Burn the eye to blind, keeping truth from mind.

No longer are you human, just a leech of the addiction.

To destroy the faith in humanity.

hatred for those privileged unlike you.

You think you will win,

but you can’t face the system of self destruction.

hatred for the self and the life.”

Do not become as the hateful and the miserable, loathing the good and those who love life. Become a light to guide those who seek greatness. Be as a torch that would light the path towards a better future. Integrate yourself, let the dissonance rectify you, and build your foundation from the bedrock that is the Truth.

Become that which cannot be broken.