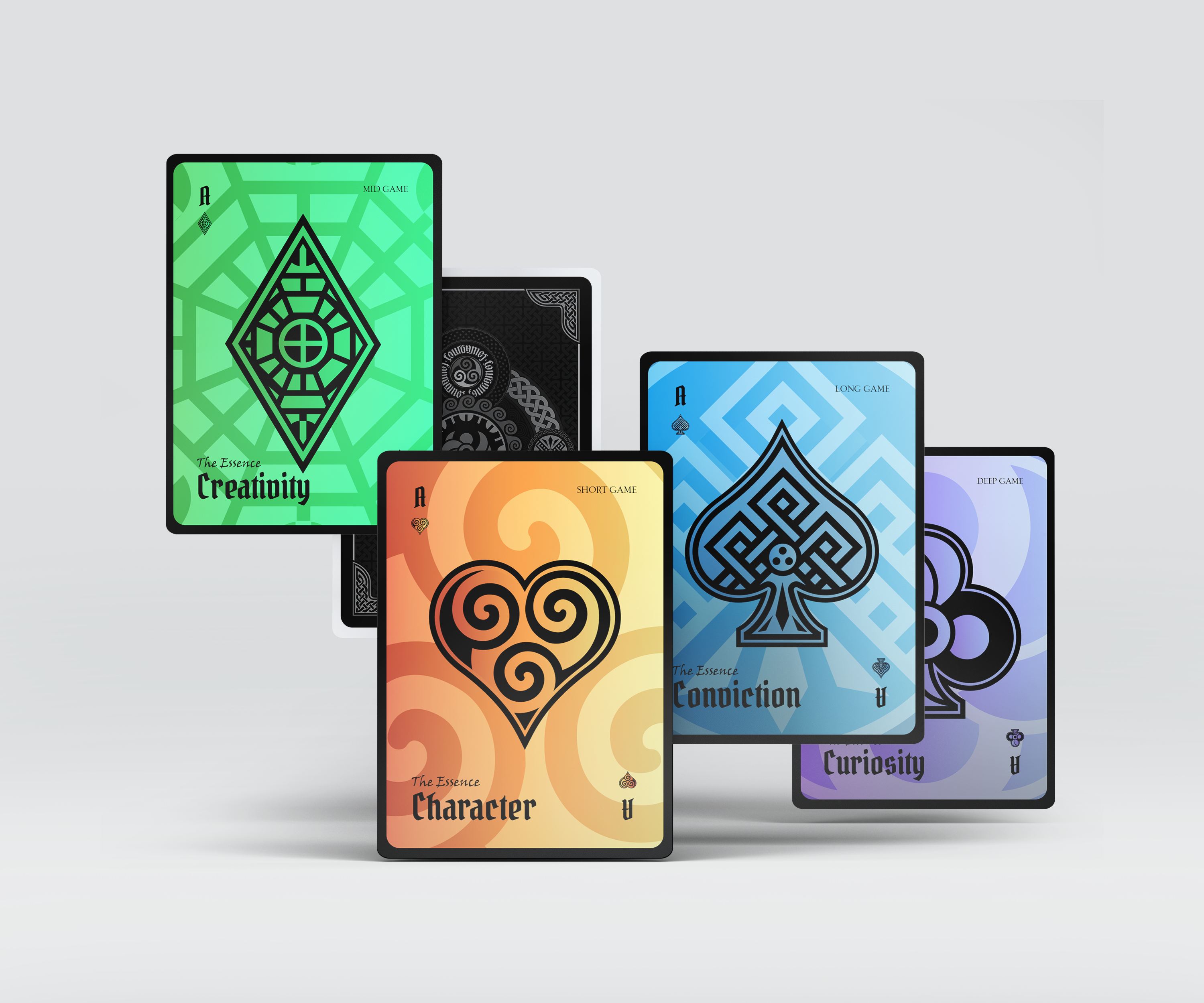 It’s taken very nearly two years, but I’ve gotten the final invoice from our manufacturer at last, and the FourGames Deck is complete. What is the FourGames Deck, you might be asking? FourGame Dynamics, or FourGames for short, is a set of mental models created by Jamie Combs, founder of Natural Balance Foods. Jamie tasked me with creating a standard 52 card deck using FourGames that works both as a normal set of playing cards as well as an oracle deck, which is a general name for decks like Tarot or Lenormand that have symbolic meanings for the cards. Today, I’m going to give you a walkthrough of the last two years of this project from ideation, design, prototyping, and manufacturing.

We’ll start with a basic introduction to what FourGames is- it’s the four areas of life that every person deals with, all the time:

Everyone has a relationship with their inner world, their outer world, the world of story, and the world of intangibles. However, we often confuse the four and talk about one when we mean the other. FourGames is just a handy way to simplify how we understand the complex world we live in to help us deal with complicated and nuanced topics a bit more easily.

My initial idea was to make a deck similar to a 72-card Tarot deck, one of the oldest kinds of oracle decks and the origin of our normal modern 52-card decks, replacing the four suits of Cups, Pentacles, Swords, and Wands with the Short, Mid, Long, and Deep Games respectively.

In Tarot, the suits represent the following:

Wands - Fire - Clubs - Creativity and Will

They map very neatly onto the FourGames- in fact, it was almost too convenient to be believed. A few years ago, the first project I did for Jamie was creating four mandalas for the FourGames, and the symbols I designed then fit perfectly into the four suit symbols for the deck:

However, I’m more of a designer than an illustrator, and Tarot decks are 72 fully-illustrated cards, so that wasn’t possible. Instead, the challenge was to figure out how to make an oracle deck out of a normal set of 52 cards instead of 72 illustrated Tarot cards.

I scoured as many philosophical and mystical systems as I could get my hands on, and inevitably settled on Joseph Campbell’s Monomyth (the Hero’s Journey,) Carol Pearson’s 12 Archetypes, and Kabbalah’s 10-part Sefirot as our building blocks. I wanted to find a way to incorporate Spiral Dynamics, but I wasn’t able to make it fit in neatly.

First, from the Hero’s Journey, I looked at the many different versions. Campbell’s has 17 stages, and there are a few others that are either 8 or 12 steps. I combined the Hero’s Journey with the 10 Sefirot, and that gave us our Ace-10 cards (the corresponding Sefirot is in parentheses):

A: The Essence (Wisdom)
2: The Impulse (Understanding)

3: The Challenge (Knowledge)
4: The Virtue (Kindness)

9: The Unification (Foundation)
10: The Completion (Kingship)

This built the structure of each Game’s Journey, the story of the progression from the raw form of the Game’s Essence to the fulfillment of the Game with the Completion. Each card is paired with the immediate next card to show progression. For example, the Dark Night is followed immediately by the Dawn- this builds in a way of communicating that every bad thing that happens to you in life can actually lead you to something better, which helps to frame our lives in a more constructive way.

Next, I had to figure out how to structure the Court Cards, and Carol Pearson’s 12 Archetypes fit perfectly. There are three kinds of Archetypes in her system: Ego (dealing with how we relate to others,) Soul (how we relate to ourselves,) and Self (how we integrate both parts into a complete whole.) These became the Jack, Queen, and King cards, respectively.

The Court cards are as follows (alternative names from other systems in parentheses):

The Court cards represent the individual at three stages in their Journey. The Jack corresponds with the Ace, the Queen with the spot between cards 5 and 6, and the King with card 10. As a person progresses through their development within each Game’s Journey, they identify with the traits of each archetype and can use them as a tool to reflect and grow.

Once this was settled, we had the basic structure of the deck sorted out!
‍

The Journey of the Short Game - The Master Trickster

The Journey of the Mid Game - The Magician’s Machine

The Journey of the Long Game - The Myth of the Sovereign

The Journey of the Deep Game - The Sage and the Mystery

The next task was to design the cards. Originally, this wasn’t supposed to be my job, I was just meant to figure out the deck system and write the corresponding book, but the person who was meant to do it dropped the ball, and I ended up having to design the entire deck myself. This turned out to be a fortunate occurrence, because it pushed me to develop an entirely new skill set and learn how to design not only the cards, but the packaging and the book, too.

The first thing I did with regards to the deck was to turn the existing FourGame mandalas into the new FourGame suit symbols. From there, I used the gradient colors from the suits to color the cards, and that basically gave us the deck. Initially, I designed the cards (and everything else) in Figma, but once we started manufacturing, I ended up having to rebuild absolutely everything (several times) in Adobe Illustrator.

Good things lead to bad things- such is life. The cycle continues.

I started writing the booklet, and it was originally meant to be 100 pages. It ended up at 162 pages of essentially full-page text. The book is dense, and it covers everything from the meaning of the original symbols, the Four Games, the Archetypes, the meaning of each type of card, and the meaning of every individual card in each game. It’s extremely thorough, but it’s the book that makes the cards so magical when you use them.

Around this point, Jamie also requested that we add in two Jokers and 8 modifier cards (Is, Isn’t, Kinda Like, Comes From, Leads To, Ha!, Huh?, and Handy Quote) which are used as a way to map out ideas with the deck. The modifiers are a little harder to explain, but they make more sense when you’re playing with the deck. This put us at our final total of 62 cards per deck.

The book took ages to write, but when that was done (about a year from the start of the project in November of 2020,) it was time to start the arduous process of manufacturing. I found us a manufacturer of cards from Alibaba, and proceeded to go back and forth with them for months. They sent over templates for the packaging, and I set about designing the packaging and then redesigning everything in Illustrator for the first time.

We put down the deposit and they took our first set of files. We then proceeded to exchange emails and revise the deck over and over again until every single card was edited 10 more times and every color, vector, font, and detail was perfect. Along the way, we printed out a few copies of the deck using MakePlayingCards.com (highly recommended, they were really high quality,) so we could finally playtest the damn thing:

It worked! Not only did it work, it works about as well as a Tarot deck, with the major difference being that it’s substantially less vague than a Tarot deck (which has multiple meanings per card and relies on the interpreter to make sense of it.) The way the book is written, each card asks you to reflect on certain human universals, like Defeat, Growth, Meaning, and Purpose. Everyone will, at some point in their life, find themselves in the shoes of archetypes like the Lover or the Guardian, and they’ll come to meet with a Dark Night and it's Dawn, or a Burden and the Gift that comes with it. No magic required, other than the magic life is already full of.

Finally, after many months of revisions, the deck was completed. As I write this, I’m going to be sending the final payment this week and we should have the order of 500 completed before the beginning of November, the two-year mark. Ah, at long last, we’re done.

This has been the most demanding task I’ve done in my entire life, bar none. The level of precision and attention to detail required to bring a product from concept to reality is a much higher-level task than I’ve ever had to do in my work before, and I learned a lot. On top of that, as someone who has written two books by just writing articles and putting them together at the end of the year, there’s a huge difference between doing that and writing a single book from start to finish. I have a newfound appreciation for writers and especially editors, it’s ridiculously difficult and I don’t know how people do it all the time.
‍

‍
We should have decks available for public consumption sometime before the end of the year. If you’re interested in getting a deck, or if you’d like to have a chat about your own product, feel free to shoot me an email at garrett@aion.enterprises or schedule a free call, I’d love to talk to you and see if I can help!